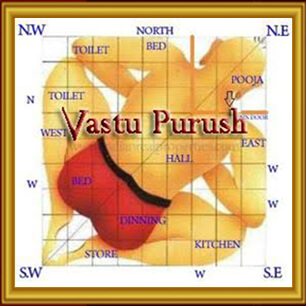 A great classical book on Astrology named Brihat Samhita explains that Vastu was given to the sages from Brahma the ultimate creator. There is a mythology concerning the birth of Vastu Purusha. Such mythological stories are innumerable in Hindu scriptures and they never fail to present the most intricate subjects of science or mathematics in the most lucid form. Historians argue about the existence and the proofs of their existence whereas the wise man learn the lesson hidden behind such stories.

There was a demon who terrorized the whole earth and heavens and he became the source of trouble to the inhabitants of the world. The Gods became infuriated by his acts of brutality and they buried him in the earth by his head embedded in the inverted position, and also started guarding that place.

It became the recognized place of Gods and the buried demon was called Vastu Purusha by the Creator Brahma who also proclaimed that the constructions on the earth will only be successful when the Vastu Purusha will be worshiped and respected. This worship and respect meant more than rituals.

Going by the same anology, Vastu Purusha has been imagined as a man lying with his back upside and bent and his head pointing toward the North East direction. His shoulders are pointing towards North and East respectively, whereas his elbows are also bent and point towards North-West and South East direction respectively. His knees are touching the elbows and are pointing the directions of the elbows only. His feet and soles are joined and are pointing jointly towards South-West direction. In this scheme the naval part of the demon will coincide the centre point of the land and was called Brahma Sthan.

So this symbolic story easily explains the directions allotted to the land and their utility represented by the body parts of the demon, where the most important ones are the head (North-east) and Naval the mid point of the land.

The Vastu Purush is located in such a way that it occupies each part of the land, however smaller the parts are. The scheme of the land division into 100 right angled quadrangular parts or 81 parts or 64 parts is such that Vastu Purush exists in each and every part which is called Pada also. So in this way Vastu Purusha rules each Pada or Units.

The Chief Technical planner of the earth after Vastu Purusha is Vishwakarma, whose origin and contribution is explained thus —

Vishwakarma the Chief Architect was appointed by the Creator Brahma for the help of Prithu, the first emperor of the world and he ordered Prithu, not to exploit the powers of the earth according to one’s whims and fancies but only after the wise advise of Vishwakarma. So Vishwakarma was given the rights to enforce the rules and regulations of the Vastu and he himself could envisage the technical part of the construction without any fear of the royal authority. Vishwakarma was given the responsibility to manifest the divinity of the gods into all the Padas of the land according to the Great plan of the Creator Brahma.